The Bucket List is complete! Hurray! What a fun project it’s been this holiday season – definitely something that I will do each year. It motivated me to do things I may not have done otherwise and created a lot of smiles. Let’s see, where did we leave off …

Well, I had to drop off my Toys for Tots donation. The collection boxes near our house said they were collecting them through the 21st. Unfortunately when I went there the evening of the 21st, it had already been picked up. Josh and I sat in the parking lot of the grocery store and called around to a few more drop off locations only to find no one still had their box out. Bummer! So instead, we just made an online donation. I’m counting that!

Okay, we still had to Watch How the Grinch Stole Christmas and Home Alone 2 and we got both of those done. Josh and I snuggled up one chilly evening and laughed our way through Jim Carrey’s version (I always watch the cartoon one while wrapping gifts) and then my sister joined us for Home Alone 2 last Friday night. Check and check!

Now, the one item on the list I was panicking over the most was recruiting my sister to reenact a childhood Christmas photo. My parents had my grandparents staying with them over the holidays and I knew digging out the old albums and locating a picture that was doable to react would be a little tough. But one text to my mom and she quickly sent over this one of my sister and I. (Although she seemed to crop herself out – come on Mom! Early 90’s hair is hot!) 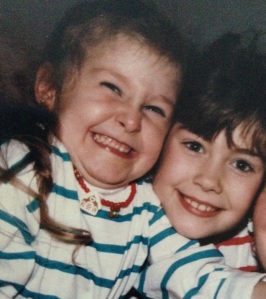 Look at those sweet faces! Ha!

So Courtney and I decided to hit up Goodwill in hopes to find the perfect shirt and jewelry to match. I was relieved that we found two shirts so similar (and the red beads too!). Instead of buying the shirts that we would never wear again, we jumped into a dressing room and giggled our way through a photo shoot. The only thing better than trying to recreate it was having to throw up lines as we pretended we were trying on clothes. “Oh, I like that one on you.” “Do you think this one hits me at the wrong spot on my hips?” “Ohhh, I don’t think that is your color.” Afterwards, we realized anyone watching from the outside would have noticed our feet barely moved as we “tried clothes on”. HAHA! But I think it was a valiant effort …. and one that will likely never appear on my to-do again. (Huge thanks to my sister for helping me with this!!! I personally think you look awesome with the multiple chins.)

Next up –  Go sledding! I don’t think I have been sledding since high school, when I flew off my sled and smashed my head into a metal garbage can. (Before they realized putting metal cans at the bottom of an icy sledding hill was a bad idea.) My father-in-law created a fun tubing hill in his backyard and I had a blast running down the twisty hill over and over again. Cali, of course, wanted to be part of the fun and would follow me up the hill, hop on my lap and wait to go down. I secretly think she loved passing Bella, their yellow lab, and boasting in the fact that she was getting a free ride. So much fun! 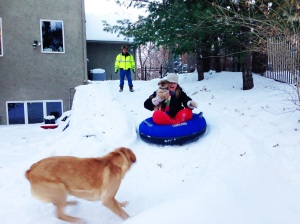 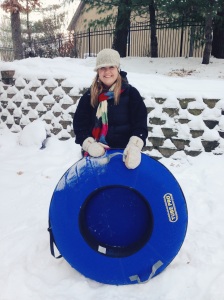 Building a snowman seemed like an easy to-do item, especially being that we live in snowy Minnesota. However our problem has been that the snow we have is the powdery kind, not at all the good packing snow that would make for a durable snowman. So Josh and I had to be creative and that resulted in a Cali sized snowman, complete with a homemade scarf, a Dove chocolate wrapper hat and some button eyes made of coal crumbled leaves. I think Cali had fun visiting her new little friend before some Christmas Eve snow took him out! 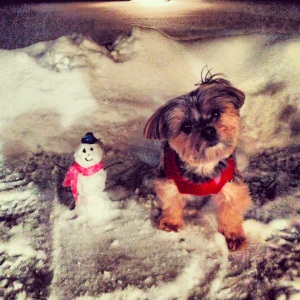 I figured as long as I was bundled up for the snowman building, I should just jump in the snow and make a snow angel. I couldn’t stop laughing and treated my family to a great Randy reenactment video from the Christmas Story as I attempted to get up afterwards. I am nearly certain Josh got some good blackmail video on me as I attempted to just “fall back” into the snow. It was worth the laugh.

I had quite a few people suggest that I buy new pajamas for Christmas morning (extra points if I match my sister) and I am so glad it made the list! Courtney and I rocked some comfy new jammies Christmas morning and it was worth the purchase.

And last but not least, looking at stars with Josh on a cold, snowy night. The sky up here was so clear one night and the star were shining so bright. It was fun and special to stop for a moment and take in the winter sky with him. I wish I had a picture to show you of how beautiful the sky was that night, but it just looks like a black photo. Darn!

I can’t believe it’s completed. It was the perfect amount of items to make it do-able, yet challenging. I am already brainstorming what’s going to be on it next year. Thanks for joining me on this fun adventure!

On a different note, we made it safely and peacefully through Christmas and the anniversary of our first miscarriage. I am so thankful for the stillness that filled my heart as the days went by and know that it was nothing short of your prayers and His presence that made the joy possible. We kept busy and the distraction was a good thing. I did find the nights leading up to it be to a little harder than I expected. Something about the silence of the night, the sleepiness of the body and the ability for the mind to race caused some tears to be shed, but they were cathartic tears and ones shed more in memory of our little ones than out of sadness.

Pinterest, Instagram and Social Media are filled with posts about people being ready for 2013 to be over with. Yes, 2013 was a tough year. But without it, I wouldn’t be who I am at the end of 2013. I wouldn’t know what I was capable of and I would have missed out on many laughs and special moments. I know the new year brings people new hope – hope of a better year, perhaps a new relationship or a pregnancy, maybe it’s a new job or a fresh start at something – but the truth is, you don’t need a digit to change on the calendar for that to happen. As these last 3 days of 2013 play out, I wonder how we would each live today if we were told we would never live a day in 2014. I guarantee these next 3 days would be days of accomplishments and heartfelt conversations, days of joy and fulfillment. Not days spent wanting to fast forward. We have the opportunity each day to wake up with renewed hope, joy and a fresh start. To make today count. To make it matter to someone other than ourselves. Every new morning gives us a chance to smile at a stranger. To compliment a co-worker who seems to be having a hard day. To pay for the coffee of someone behind us in line or spend some extra time on the phone with Grandma, listening to her stories. Don’t try to rush these last few days of 2013, because I can promise you this, 2014 will have its own trials as well. All we can do is live in this moment, because our future is not guaranteed. Our relationships will change and if we don’t have our prioritized set correctly, we will somehow blaze through another year feeling unfilled and empty.

I do love how each year seems to hold a new lesson for me. 2012 was a year spent learning about gratitude – applying Philippians 4:6-7 to my life and praying with thanksgiving. 2013 was spent learning more about hope and being reminded that “my only Hope is in Him.” (Psalm 39:7b). So what will 2014 be about? Joy. I can already feel the Lord beginning to teach me on a deeper level that my joy needs to come solely from Him. Not from circumstances or earthy things, but simply rooted in Him. I can’t wait to explore this even more in 2014!

So friends, let’s savor these last few moments of this year. We will never again have another December 29, 30 and 31st of 2013. Let’s make new memories and make today count. Cheers! 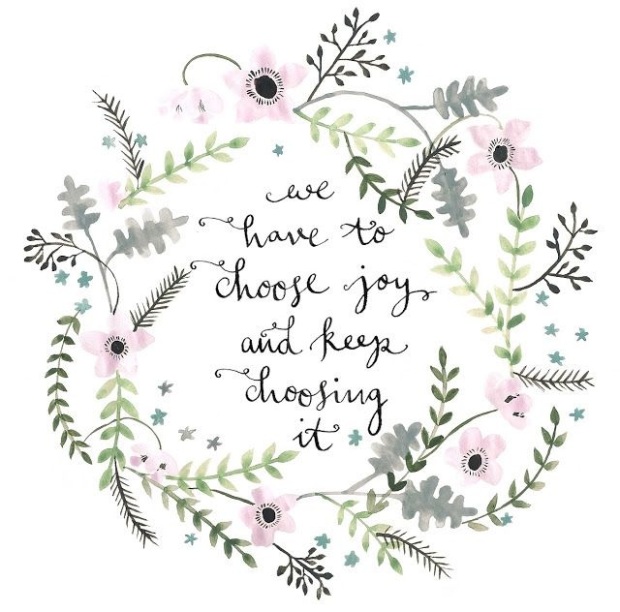 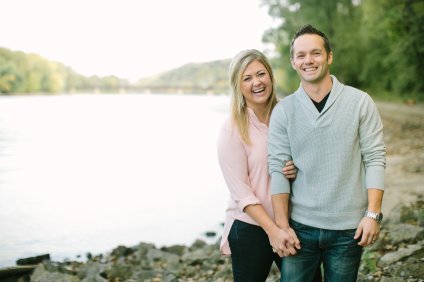 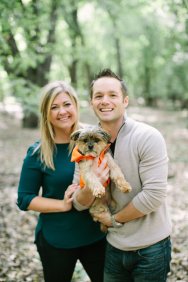 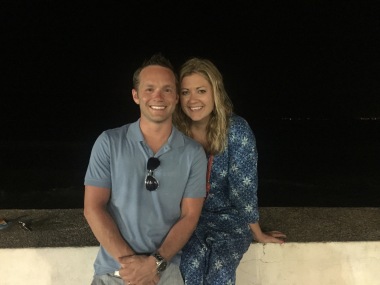 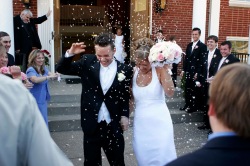