What can I say other than I love this girl? Our What’s It Like featured sharer today is my good friend Heidi Anderson. Name sound familiar? Yes! It’s the Heidi I co-wrote In the Wait with! We have known each other for years, first serving together in children’s ministries at our church and becoming friends through that. She is one of the most vivacious, encouraging, and kind people I know and her fire for the Lord is undeniable. I have so richly blessed to have Heidi in my life and I know you will walk away encouraged by her story and the truths she shares.

Heidi, thank you for sharing your story with us and allow the Lord to shine brightly through you!

So imagine my surprise when I felt a bump on my neck. My mom assured me colds can enlarge lymph nodes, but when another bump appeared a month later, I scheduled a doc appointment to be sure.

Fast-forward to that moment, and I’ll never forget sitting on that white, crinkly paper, staring at a doctor who held my results, and hearing the words: “You have Hodgkin’s Lymphoma.” I was 23 at the time (which meant my mom came with me everywhere), and I remember looking over at her, clearly frustrated because I had never heard of such a thing, and asked, “What even is that?”

She nodded and affirmed cancer in your lymph nodes—and then the next moment later, I was ushered before a scheduling assistant calling an oncologist for the next available appointment. Which apparently was 3 weeks away.

I walked out of that appointment desperately needing a Savior. Have you ever felt like that? I hadn’t before. A situation so out of your control, there’s nothing you can do to fix it, and you know you need help, Someone bigger than yourself. So I sat in those 3 weeks, not sure what the future held, how far along I was, and what treatment would look like. And praying every day for help.

Finally, I met with my oncologist, and he confirmed stage 2 cancer with 6 months of chemotherapy and 6 weeks of radiation ahead. He then dove into all the possible scenarios that could result—like loss of muscle movement in my neck, or how chemotherapy could attack my ovaries making me unable to have kids. You know, trivial things.

Then came the symptoms that could develop in the future—breast cancer is a common second cancer and could come in my early 30’s (which is now….#thisis30) and by the age of 40, one of the chemotherapy drugs could result in a cardiac arrest or heart failure. Again, all things trite.

In all seriousness though, I say that because dealing with cancer in and of itself is scary and COMPLETELY lame. But then the enemy wants us to battle fear for the rest of their lives, because no matter how many years you’re in remission from that one cancer, there’s a whole legion of other deathly diseases knocking at the door. But I’m finding there’s reason God tells us in the Bible “do not fear” 365 times—every day, we have every opportunity to cower, but will we trust Him? That’s up to us.

This is where my story gets good.

I heard my pastor give a message around that time about suffering well—how men and women of the Bible had scary things happening to them. Daniel was thrown into a den full of hungry lions and Paul was beaten and thrown into prison… but Daniel didn’t focus on the roaring of the lions, and Paul didn’t stare helplessly at the bricks around his prison cell. They chose to believe that their reality was more than what meets the eye—and that God is working behind the scenes, and ultimately, He has already overcome.

I heard that message and thought, “That’s what I want, I want to do whatever it takes to suffer well.” And after that decision, three wonderful, jaw-dropping miracles followed that only the hand of God could orchestrate Himself:

We messaged back and forth, met a couple months later, and got married almost a year after. The best, you guys. This, by far, has been my favorite blessing and proof alone that I serve a good God who gives abundantly good gifts to His people! 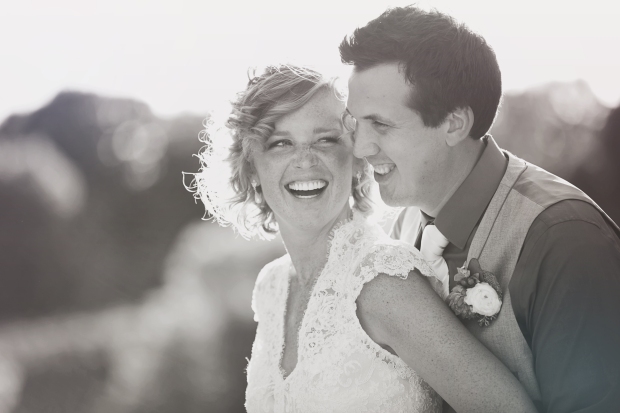 The doctor soon found my body was responding well—and not just a “healthy, you’re on track, making progress as we projected” well, but like “plans need to change” well. Instead of 6 months of chemo, he cut it in half to 3 months and I was able to dive into radiation that much sooner. A miracle was happening before my very eyes, and it was UNDENIABLY Christ.

I want to pause here to say that I understand this isn’t everybody’s story. I’m not saying that if you pray and have faith, you’ll be healed, your child will be healthy, you’ll make plenty of money, and everything will go your way. But what I’m saying is that, sometimes, I think we as Christians forget about the power of prayer and give up on hope too early. We hear about a friend who was diagnosed with a terrible illness, we hear about a marriage on the rocks, and we hear about a friend struggling with infertility, and sometimes, we think, “That is so sad. I’m so sorry.”

But the truth is, we have the very Spirit of God who raised Christ from the dead, living in us, you guys! Alive. Working on our behalf. And still more powerful than anything we could ever face. So why do we respond so weak? Why do we even think to give up the fight before the battle has even finished?

And trust me when I say I was in the battle. It wasn’t all good, and God’s hand wasn’t always evident. I remember one night, the chemo drugs had an adverse effect on my body, and I was up all night, screaming into a pillow because my tongue literally felt like it was on fire. I had tears streaming down my face, begging God for relief, and I had to wait until the oncology center opened and they altered my treatment. There were plenty of those moments—when I’d touch the port on my chest and barely feel human, more like a robot than anything else, and just cry. When my hair started to fall out into clumps, and I had to shave my head. When the doctor told me I very well might not be able to have kids, and I’d cry for the future child I knew I was supposed to have.

But I once heard my pastor put it this way—we know what happens when we don’t believe. Scripture shows us clearly when His people didn’t take hold of the faith, they didn’t enter the Promised Land, Jesus couldn’t perform miracles in His own hometown, etc. So when we give up, we know the battle’s been lost. We’ve forfeited the victory ourselves.

But when we hope? When we pray for our friend to be healed, that marriage to be saved, and that friend to get pregnant, and actually believe it will happen, we very well might see the hand of God move. We might see people’s faiths getting restored and miracles happening. So why not hope? I’ve learned we can’t let our fear or disappointment get in the way, and we must remember God’s Word when it says, “As for me, I will always have hope.”

So that’s my story, you guys. I wouldn’t have dreamt it, I would’ve loved a life with a perfect health record, and I still battle fears about the future because of my experience. But His hand has so heavily moved in my life that I’m eternally grateful and constantly convicted to live a life worthy of the calling I’ve received.

And let me leave you with this—whatever you’re fighting against today, whatever you’re struggling against to keep the faith, and whatever is chiseling at your spirit and threatening your hope, remember the deeds of the Lord. Look back on your life, cling to those moments when He’s moved on your behalf, and don’t waver in the belief that He will move again. Because that’s our reality, that’s our truth. Not our struggle, not the things we can see with our eyes. But what we can’t see, the pieces God is moving into place that we can’t see, and the God who is ever-powerful and ever-loving that we can’t see but is indeed working and loving us today. 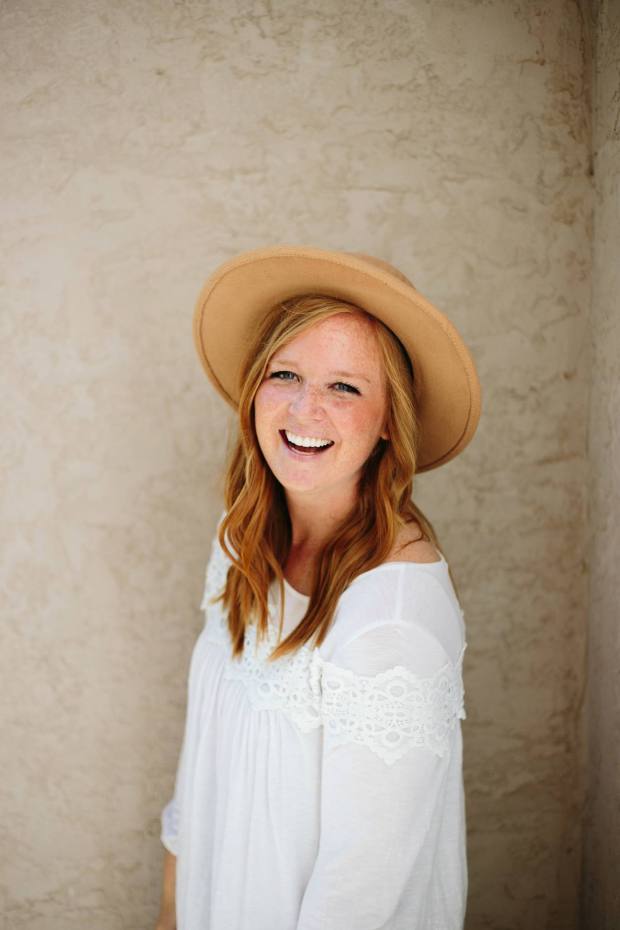 Heidi is a writer, speaker, and stay-at-home mom, who crafts daily devotionals for Eagle Brook Church, cleans up cheerio spills around the clock, and drinks coffee like a Gilmore. Ultimately, Heidi’s passion and the fuel behind her writing is that Christ-followers would realize, know, and claim the victory God offers His people—in the mundane, amidst the heartache, and on top of the highest mountains. You can follow her on Instagram at @thismotherhen and check out her daily devotions here.

PS – Don’t miss a thing with this series! Follow along on Facebook and Instagram to catch each of the upcoming stories! I absolutely LOVE connecting with each of you!

PPS – If you’re ever looking for a devotional on living life while in a waiting season, check out the devotional I co-authored called ‘In the Wait’!

PPPS – Check out the other contributions from this series, including What It’s Like: to experience multiple IVF cycles, raise a child with special needs, use an egg donor, be a DIY-er and home style blogger , be a NICU nurse,  Live fully in singleness while still hoping for marriage, suffer with endometriosis. experience depression, start a company, have a micro preemie,  lose a parent, be childless not by choice, have a spouse with a chronic illness, fund raise for fertility treatments, have a traumatic birthing experience, take a natural route with infertility,  be on a reality show, go through the adoption process, have male factor infertility,be a stay at home mom, be an entertainer,  be given a Down syndrome diagnosis for your child , experience multiple miscarriages, have a surrogate, experience a late pregnancy stillbirth, be a police officers wife, be a working mom , be a breastfeeding mother, have weight loss surgery, donate and adopt an embryo,  be on a reality show, go through the fostering process, throw a themed dinner party and have PCOS. Stay tuned for many other amazing topics to come every Tuesday and Friday here!