Josh and my first official date was on Valentine’s Day 2004. No pressure for a first date, right? This date was about to set date precedence for our relationship moving forward. (Plus, we hadn’t had the official DTR talk yet! Oh the horror.)

Anyways, we knew we liked each other and we knew that we wanted to spend Valentine’s Day together (well, I am not sure we said that out loud, but I was thinking it), so I was thrilled when Ritchie IM’ed me (ahh, AOL Instant Messanger) and asked me if I would go out on a date with him on Valentine’s Day. “I would love too!” I wrote back, probably with a lot of !!!!!!!’s and some creepy smiley faces. Regardless, all he told me was that he would be picking me up in the Olson lobby at 3:30 and to be ready for a surprise evening. I had no idea what we were doing, although my friend Katie did but she was sworn to secrecy. (Luckily she helped me picked out an appropriate outfit.) Saturday came fast and at 3:30, I was ready in the lobby. Katie was instructed by Ritchie to take a picture of us and then hand over the memory card. Our first “couple” picture together. Cutttteeeeee. Of course I wondered what the memory card had to do with it, but was too excited to over think it. 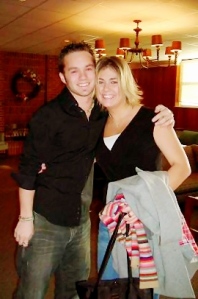 We got into Ritchie’s car (the black fancy new Jetta that introduced us) and off we went towards Indianapolis. We talked in the car, listened to some acoustic music and then finally, 45 minutes later, pulled up to … Walmart. Ummm. We went inside and back to the photo area (phew), where Josh handed over the memory card and asked them to make us 2 copies. We would be back in an hour and a half. “What is going on?” I thought, “I hope that was a good picture and my hair looked cute!”

From there we crossed the street and pulled up outside the new restaurant that was the talk around Indiana at the time, Texas Roadhouse. We had spoken about it in December, so I was pleased that he remembered that I said I would like to go there one day. Not only that, but he made reservations (which they took at the time), and we were seated promptly, while many other couples gathered at the door.  (HA! Suckers!) We were immediately introduced to the rolls with cinnamon butter and it was one of my first chances to observe the amount of food Josh can consume when he likes something. “Look at him eating a dozen rolls,” I thought, “That is soooo cute.” Dinner was very fun and before long, we were departing and heading back to Walmart. After picking up the pictures, (whew, my hair looked decent), we drove for 15 minutes and pulled up at our next destination – a Barnes and Nobles. Now, for those who know me, I adore bookstores. In fact, they are one of my favorite places to go and the fact that after a couple months of knowing each other, with no local bookstores nearby, he knew that I would love to spend some time at one, made me glow. I was instructed to pick out a book, any book I wanted, and that he would buy it for me. I spent time slowly grazing through the aisles until finally I settled on a book – The Crimson Petal and the White by Michael Faber. (I have to be honest, the only reason I got it was because it was on the New York Times Bestseller list, was impressibly thick at 894 pages, and to this day, I have not read past the 1st page. Did you know that Josh? Sorry.)

It can’t get better than this! I thought as we got back into the Jetta. We were then off to a mall, where we went inside and headed towards … Build A Bear. Now, I remember telling Ritchie in passing at some point, that I had never been there, but was shocked when we walked in. Once we were inside, he told me we were creating stuffed teddy bears for one another and that’s where the photo came into play – we were going to bury one inside each bear to create a time capsule of our first date. (Seriously ladies, I was swooning.) A short time later, we had chosen and constructed each of our bears, loaded them into their new boxed home, and were back in the car.

I really thought the evening was coming to an end, but we were now entering downtown Indy. Josh led me down the street to a …. Starbucks. (BE STILL MY HEART!) Ritchie knew that I never got Starbucks while at Taylor (After all, this nearly was the closest one to school an hour+ away and luxuries like lattes weren’t on my college budget). A delicious drink later, we stepped back into the street where a horse and carriage was awaiting us. I’m serious. I know this part of the story sounds too much like a movie, but its true. We had a horse and carriage take us around downtown Indy in the crisp February evening with our hands warmed by our Starbucks. It was such a perfectly wonderful first date, one that would be hard to live up to, but he still surprises me like this to this day. We still have our teddy bears and I am always brought back to the memories of that date when I see him. However, what I remember the most about that date was not the events or purchased items, but the thought out details that came from knowing me, from the bookstore to the Starbucks, and the amount of fun we had together. That has never changed.

Imagine my horror when I gave him his gift later that night, once we were back at school. A fish. A goldfish to be exact. I named him Jaws to be humorous. To this day I have NO idea why I thought a messy college guy who lived in an off-campus apartment with another equally messy guy (sorry Becker), would want an aquarium with a goldfish. But that’s what I got him. And I told him it was our love fish. (This must have been around the time How to Lose a Guy in 10 Days was popular – was I thinking it was a love fern?). Regardless, the next morning Ritchie called to tell me our “love fish” died overnight. Luckily, the second one I bought him (yes, of course I replaced it) lived a little longer. Yet, still, to this day, we have decided fish aren’t for us. Thank goodness our dog is still alive. 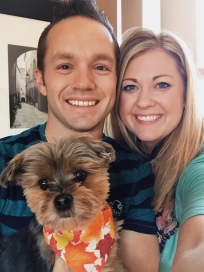 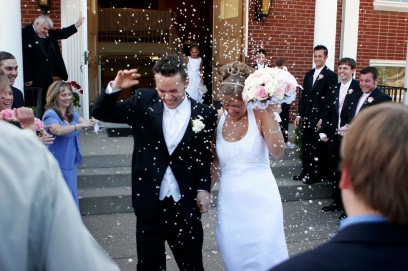 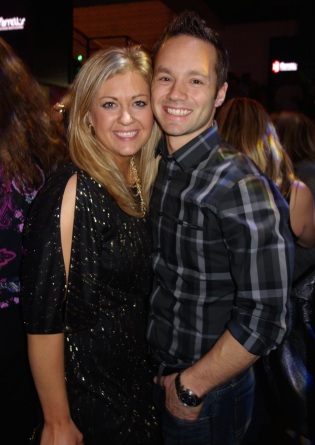 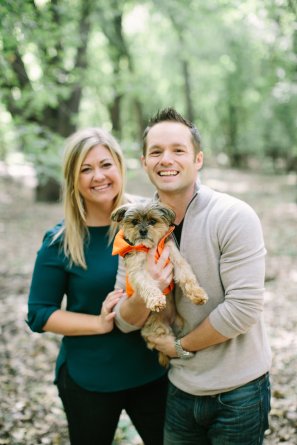